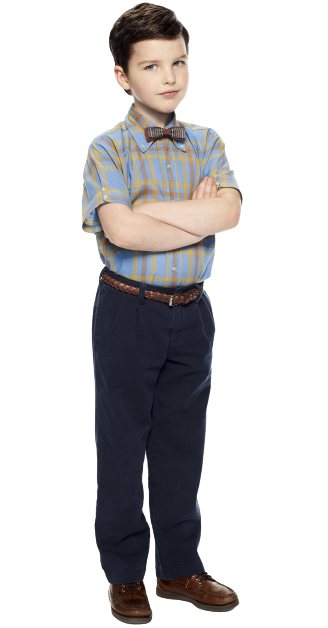 Played by: Jim Parsons (The Big Bang Theory), Iain Armitage (Young Sheldon)
Voiced by: Luis Alfonso Mendoza (Latin-American Spanish dub)
"I don't understand why in this group, I never get my way."

Leonard's roommate. A child prodigy, he graduated from college at the age of 15 from East Texas and specializes in Theoretical Physics. Supposedly the smartest of the guys, but he only ends up dominating arguments and debates (both in science and in nerd trivia) because he's too stubborn to quit and resorts to crazy logic to win. His dedication to science and geekdom is so complete that he has almost no interest in social skills, regular pop culture (current fads, celebrity gossip, etc.) or even romance. He thinks he's superior to... well, to everyone.