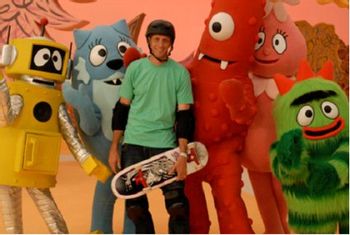 Just when you thought Tony Hawk couldn't get any more rad.
I think that the best things that came out of it were the chance to do Blanche, and also I did a Sesame Street video that was very satisfying to me. And I don't think I would have been asked to do that if I hadn't reached a little bit higher profile in the 'industry.' That was really rewarding.
— Frances McDormand discusses some perks of winning an Academy Award
Advertisement:

What well-known bands or actors acquire when they appear as themselves, or doing their instantly-recognizable acts, on a television program aimed at young children.

Like many things about modern kids' TV, the concept was pioneered on the Trope Namer Sesame Street, and subsequently became a staple of the many programs inspired by it. The basic idea is to make it easy and fun for parents/guardians to get involved in their kids' educational process; however, over the years, it has spun itself off into a unique celebrity cachet. An appearance on the Street — or nearby programming suburbs — has become almost as potent a sign of stardom as an appearance on Leno's or Letterman's couches.

May involve a certain amount of Bowdlerization to keep things kid-friendly and/or educational. Bleached Underpants sometimes results as well.

Mostly occurs in live-action shows, but an actor or band with a distinctive voice can provide the same effect in animation.

The serious older sibling of Parental Bonus. When a person does this sort of cameo because their children are in the target age for the work in question, that's So My Kids Can Watch. If the celebrity in question did work on a children's show before becoming famous, it would be considered Retroactive Recognition. If the celebrity was a big fan of the show they were cast on growing up (a common case with Long Runners like Sesame Street, Scooby-Doo and SpongeBob SquarePants), or are currently a member of the Periphery Demographic for the show and decide to take this role, their Sesame Street Cred would also make them a Promoted Fanboy. If the celebrity generally comes from adult-oriented media, it can be a Sub-Trope of Demographic-Dissonant Crossover. For the inverse (with the Sesame Street, Muppet Show, or related cast only), see Muppet Cameo. When someone famous writes or performs song for a children's show, that's Pop-Star Composer.

Note: When adding examples, please remember that not all animated series are aimed at young children. Rule of thumb: the closer the age of the show's target audience is to the age of the guest star, the less likely it is to be this trope. Also, remember that nearly all inverted examples of this trope go in Muppet Cameo, not here. Finally, please do not include examples where celebrities are guest-starring as characters other than themselves or not doing immediately recognizable acts.