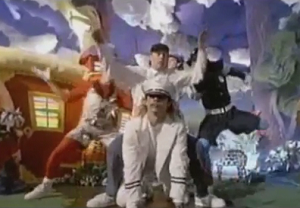 A Made-for-TV Movie produced by the now defunct Think Entertainment that aired on the Disney Channel back in 1990, this stars Gordon, a seemingly normal kid who wakes up to discover that he is the son of Mother Goose (played by Jean Stapleton), and that he lives in the magical Rhymeland. Gordon meets up with Little Bo Peep (played by Shelley Duvall) as they later team up to rescue his mother. Along the way, they meet up with several other familiar "Rhymies", or nursery rhyme characters, played by an All-Star Cast.