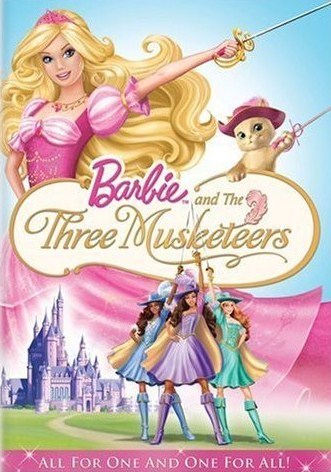 Barbie and the Three Musketeers is a 2009 Direct to Video movie and part of the Barbie film franchise, releasing in between Barbie Presents Thumbelina and Barbie in a Mermaid Tale. As the title suggests, it's The Three Musketeers, done with Barbie in the main part.

In this version, Barbie (voice of Kelly Sheridan) plays Corinne, daughter of D'Artagnan and Constance. Corinne wants to become a Musketeer, like her father, but she's a woman. Undaunted, she sets off for Paris, where her letter of recommendation is instantly stolen and she is forced to work as a maid in the castle. She gets her chance, however, when she's forced to reveal her training after an attempt on the Prince's life goes awry. Along with fellow maids Aramina, Renée and Viveca, Corinne works to counter the plot of an evil chancellor (voice of Tim Curry) who wishes to usurp the throne.

True courage is pursuing your dream, even when everyone else says it’s impossible.
— Barbie
Feedback

All For One unplugged

All For One unplugged