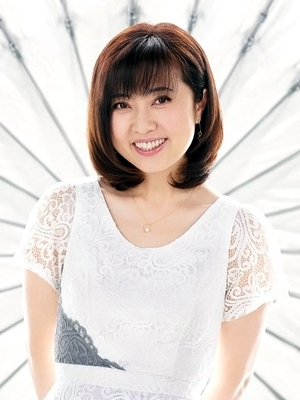 Possibly the hardest-working woman in anime.
A pop/rock performer of substantial fame and talent with an international following, nurse wannabe, Megumi Hayashibara (born March 30, 1967) is probably best known in the United States for the hundreds of anime and video gaming roles she's portrayed; reading her resume is like reading a history of the best in Japanese animation.
Advertisement:

Born in Tokyo, Hayashibara was part of the wave of voice actors, particularly actresses, such as Hekiru Shiina and Mariko Kouda, that were marketed to celebrity status during The '90s due to the large amounts of money provided by recording companies, and the more multi-media approach to stardom developed at that time.

Megumi double-majored in voice acting and nursing as she debuted into the voice-acting business, and earned her nursing qualification upon medical school graduation, but decided to stay on voice-acting as her career and never got the chance to work in a hospital-based setting.

Debuted as a kindergartener from Maison Ikkoku, she received her first official gig and Star-Making Role as Himiko Shinobibe of Mashin Hero Wataru; which led to her stardom as girl-form Ranma of Ranma ½ shortly after.

As of current, she stands as one of the most legendary of Japanese voice actresses in the business due to her extreme talent and resume. Just by naming any of the roles listed below alone would be a career-making milestone for a voice actress, but as a Woman of a Thousand Voices, Hayashibara has the talent and skill to win that kind of part again and again. She is such a major figure in the anime industry, that the character of Megumi Reinard in Martian Successor Nadesico was actually based on her; partly as parody and partly as tribute. She is arguably one of the few voice actresses who isn't set in a role. Her huge number of voice credits have invited comparison to Mel Blanc, June Foray, and Frank Welker in American Animation.

Whenever she takes part in an anime project, she would frequently take on the case to perform its theme song, most notably for the Slayers series, Saber Marionette J, and Shaman King. She was also noted to take part in "voice actress idol groups," such as DoCo for promoting Ranma ½. Her accomplishment in breaking into mainstream J-pop as a voice actress paved the successful singing careers for the generation of voice actresses after her, namely Nana Mizuki, Yukari Tamura, and Yui Horie.

She authored (but didn't draw) a biographic manga about her experiences as a voice actress, titled Megumi-Toon.

As she slowed down her pace to focus on her family, she would continue to take on her long running roles for steady income, and own her own personal management agency to take cases only when a project request her for a role. Megumi married someone three years younger than her when they first met in 1998 at Woodpark Office.

She can speak English aside from Japanese. When she visited the Anime America convention in 1995, she made a speech entirely in English because she's convinced that the translation done for her in the 1993 AA convention did not reflect her thoughts.

Just to name a few of the characters she's voiced, she has been: