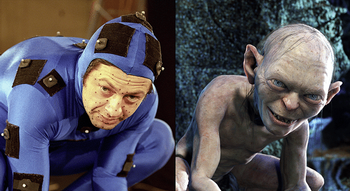 The trope namer himself in the role that defined his specialty.
"See Andy Serkis deliver an Oscar-worthy performance by capturing the graceful movements and emotions of Caesar, and doing his best Christian Bale "Batman" impression, while the cast and crew deliver an even more Oscar-worthy performance by not laughing at a tiny British man in a unitard pretending to be a monkey."
— Honest Trailers for Dawn of the Planet of the Apes
Advertisement:

Characters created with computer graphics over a motion-captured performance.

This is named after Andy Serkis, who was transformed by CGI wizardry into the characters of Gollum (from The Lord of the Rings and The Hobbit) and King Kong for Peter Jackson's films. The story goes that Jackson planned for Gollum to be entirely computer-generated and Andy Serkis to only provide the voice, but was so impressed by Serkis's mannerisms and facial expressions in his audition that he decided they just had to capture it somehow, leading to Andy physically playing the part as well. Thus Andy was on-set with the other actors performing the character, rather than the original plan where the actors pretended somebody was there. This turned out to be beneficial: the actors could play against a fellow performer, and any interactions Andy made on set would be captured on camera, such as stepping in water, throwing rocks or pawing Frodo's petticoat.

The trope name is a Pun on the phrase "circus folk".

Historically, this technique originated even earlier from performance models used for reference or outright Rotoscoping. Technique and technology evolves, though, and the production may use different methods to achieve the same effect. An actor can be simply in a green suit to be used as reference points for other actors, the actor may wear a modified suit with reference dots on all joints so the VFX artists can recreate their unique performance, or there may be a real time performance setup, a facial capture headset and motion-captured camera objects in order to create a virtual set. Any method can land in the Uncanny Valley if the CGI overlay doesn't work, or if it wasn't meant to work. The Up to Eleven version is Avatar and The Adventures of Tintin, which were performed on an indoor motion capture set where everything is CG, but the actors still provide the core body, facial and vocal performances.

The same methods can be used for a partial CG replacement, typically placing an actors face on a robot body. Even if the entire character is not created this way, the nature of big special effects movies often involve the actors doing the exact same thing wearing a motion capture suit. Video games and All-CGI Cartoon will of course do this regularly.

The line between this trope and Roger Rabbit Effect is difficult to define—generally, the latter uses hand-drawn animation, and the animated characters are treated as animated in-universe or are otherwise acknowledged to be distinct from their live-action surroundings through sheer art style. As well, Serkis Folk are almost always played by an actor with similar proportions as their character on-camera.