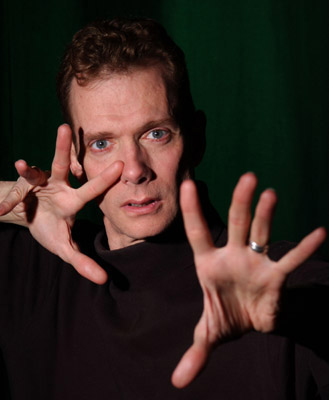 Doug Jones (born May 24, 1960 in Indianapolis, Indiana) is an American actor, contortionist, and mime best known for his roles in science fiction, fantasy, and horror as non-human characters that usually require hours worth of makeup being applied to his person, very much like Lon Chaney in his day. He has performed in such films and television series as Buffy the Vampire Slayer, Hellboy, Hellboy II: The Golden Army, Pan's Labyrinth, and Fantastic Four: Rise of the Silver Surfer. He frequently plays in Guillermo del Toro's films. He currently co-stars in Star Trek: Discovery as Captain Saru, a Humanoid Alien with a distinctive gait.

He is a big supporter of — and is involved in many — independent films and shorts. Special effects-wise, he is to Practical Effects monsters what Andy Serkis is to motion-captured ones.

He's much beloved by fans for his sweet, funny demeanor and giving of hugs to anyone who will take them.

Incidentally, he is not the same person as Alabama's former junior Senator. He's a busy man, but not that busy.

Productions Doug has been a part of:

This actor's work contains examples of: