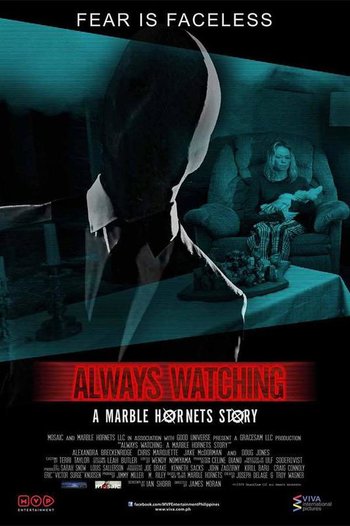 A small town news team (Chris Marquette, Alexandra Breckenridge, and Jake McDorman) is on the hunt for a story. While following a crew responsible for clearing repossessed houses, they stumble on one house that isn't like the others. Unlike the previous houses, which have been mostly emptied by their former owners, this particular house still has almost all of its previous owners' possessions still in place. Upon searching the premises, the news team discovers a collection of tapes belonging to the family that lived in this house. As they go through the tapes, the members of the news team begin to find disturbing evidence that the family was being stalked by a mysterious figure...a figure only visible through the lens of a camera. As the members of the team struggle to learn just what happened to the unfortunate family, they begin to notice a figure appearing in their cameras, a tall, thin, blank-faced stranger in a suit (Doug Jones). The intrepid reporters find themselves in a race to solve the mystery behind the Operator before they become its next victims.

As the title would suggest, this film takes place in the Marble Hornets universe, but does not feature any of the characters of the original series (with a single major exception). The film was released on April 7th, 2015 through Video On Demand services and will be receiving a limited theatrical release on May 15th.