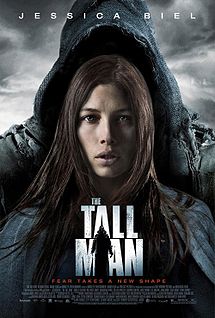 The Tall Man is a 2012 English-language French mystery film written and directed by Pascal Laugier, and starring Jessica Biel (also one of the twelve executive producers credited) and Jodelle Ferland. In the small mining town of Cold Rock children are disappearing on a regular basis, and the abductions are blamed on a local legend called "the Tall Man." Jessica Biel plays a nurse whose own son disappears, leading her to seek out the mystery of the Tall Man.

The film is known for bearing some similarities to The Slender Man Mythos, with a tall shady figure who gets connected to the strange disappearances of children. That's about as similar as it gets, as the reality is much different.

The Tall Man Provides examples of: