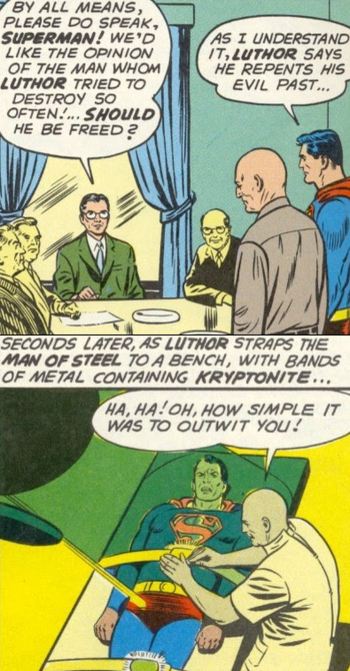 "This amusement park was constructed entirely out of a sense of remorse for my past transgressions, and is in no way associated with any sort of evil plot or premeditated misdeeds."
— Dr. Eggman, Sonic Colors
Advertisement:

Once again, the villain has gotten out of the Cardboard Prison. But this time, they've just served their sentence, with possible time off for good behavior, and guess what? They're no longer interested in crime, they just want to be an upstanding citizen. The system works!

And if you believe that, I've got a slightly used Death Ray to sell you. This is usually just a ruse on the part of the villain, who has been plotting new crimes in secret. It may even be part of an elaborate scheme to get the heroes to drop their guard and insinuate the villain as a Heel–Face Mole.

An important part of this plot is that everyone else will usually believe the villain right away, it's the heroes who are made to look like fools by their paranoid suspicions. This can veer into Through the Eyes of Madness territory. The villain may set up a situation that looks like they’re up to old tricks, so that the heroes will come barging in to stop their... perfectly lawful activities. This makes the villain look like an innocent victim of petty harassment and discredits any heroes who continue to suspect that they’re still up to no good. Matters may escalate to the point where the duped heroes end up with tarnished reputations or trouble with the law.

Sometimes the villain is so proficient at leading a normal life that you have to wonder why they even bother with being a villain. Couldn't they just get someone to Cut Lex Luthor a Check? This is more plausible if the villain is just insane or motivated by animosity toward the heroes.

In particularly tragic instances of this, the villain really does reform, but the mistrust from their environment (and possibly the hero in particular) convinces them it's not worth it, and they go back to villainy.

Compare Heel–Face Mole, in which the villain flat out pretends to pull a Heel–Face Turn.

Contrast Heel–Face Turn (where the villain actually becomes an out-and-out hero) and/or Reformed Criminal (where the villain genuinely changes their ways), Retired Monster (where the villain gives up villainy simply because he's tired of it), Villain with Good Publicity (where the villain cultivates a long-term respectable reputation while continuing their evil deeds out of the public eye), Chronic Villainy (the villain sincerely attempts to reform but cannot get over their old obsessions), and Reformed, but Rejected (the villain really does give up their evil ways — but the hero still doesn't believe it). See also Then Let Me Be Evil, where a character (re)turns to evil because everyone treats them with suspicion.