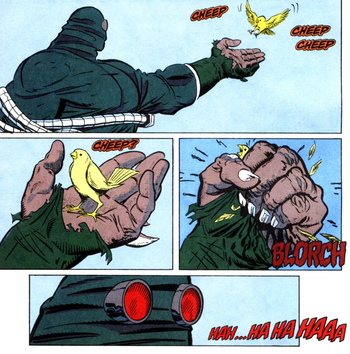 What a Cheep, senseless death.
"Skull Face shakes your hand like a friend, and then uses the other hand to control you like a puppet."
— Code Talker, Metal Gear Solid V: The Phantom Pain
Advertisement:

You're watching a movie or something, and there's some character named Bob who may or may not be rumoured to be kind of evil, but you don't know for sure. All you know is what he's doing right this minute is kind of endearing from an audience perspective. He's fun, he's cool. Quirky, maybe, but in a good way. At this rate, he'll be a runaway favourite with the fans. Yeah, he's okay. We like him. He's...

Wait, what is he doing now? Why has he cornered Tropey in the old mill? What's with the bicycle pump, oven mitts and three pounds of feathers? ...oh. Oh, no. Oh God, not the dog! NOT THE DOG!! NOOOOOOOOOOOOOOOOOOOOOOOOOOOOOOO! Bob, you horrible bastard! How could you do such a thing?! I can't believe I used to think you were cool!

Did the cunning writers set you up to sort of like the villain just so it would be even more jarring when you realized he was, well, evil? That's this trope.

Kind of a cross between Pet the Dog and Kick the Dog, but the Pet the Dog action needn't be nice — any combination of cool, badass and funny works just as well, as long as it's all calculated by the writer to get you on this character's side. Kind of a bait-and-switch technique for viewer sympathy. Distinct from Face–Heel Turn because the character was always this much of a psycho, but the audience just hadn't seen it yet, though they may have heard that they did something bad offscreen. It's generally always done purely to accentuate a Kick the Dog moment — you see a bit of personal quirkiness or interesting Backstory that has you liking this character, that has you 'on their side', and then they do something really really nasty, and as a viewer you feel worse because you're guilty by association. This is anything that makes you squeal, 'But we liked him!'.

This can sometimes lead into Evil Is Cool, if the baiting gave birth to a well done and legitimately threatening villain with all the 'cool' evil toys at their disposal, or if the previous self was considered not good/exciting enough for the audience. The reverse can also be true, however, because when done to a character who used to have Evil Is Cool traits, the 'cool' traits may be revoked and the character becomes downright despicable not meant to be viewed with good awe for villain standards.

Compare/contrast the other Tropey the Wonder Dog tropes, especially Pet the Dog and Kick the Dog. Contrast Adopt the Dog, those who look morally ambiguous/neutral until they do something good to set them as likable. If it's the series itself that seems relatively harmless until it happens, there may be a Dead Star Walking indicating that Anyone Can Die. Can induce Mood Whiplash. Also, compare and contrast with Villainy Discretion Shot; oftentimes the only line separating this trope from that one is that we see the dog kicking moment in gory detail. A Bait the Dog moment can subvert an Establishing Character Moment, or it might show that the character is more complex than first appears. Often a Bitch in Sheep's Clothing, ironically, or perhaps fittingly enough. Also, see Evil All Along, Wise Old Folk Façade and Faux Affably Evil. Compare Devil in Plain Sight, where the character is blatantly evil but nonetheless fools most of the other characters.

This is ultimately a Betrayal Trope (of audience expectations if not other characters in-universe), so there will be spoilers. Sensitive details are spoiler-tagged, but many names are not.

Pirate Captain Mel, in his Villain Song, promises that despite being a Card-Carrying Villain, he will not throw his men overboard. He said nothing about refraining from STARTLING them off the ship.

Pirate Captain Mel, in his Villain Song, promises that despite being a Card-Carrying Villain, he will not throw his men overboard. He said nothing about refraining from STARTLING them off the ship.