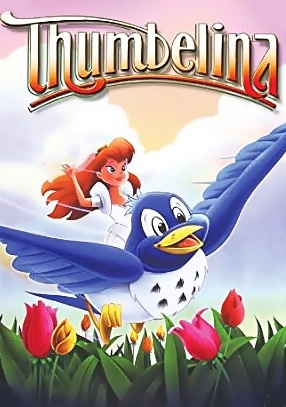 Thumbelina is an animated film by Golden Films and distributed by GoodTimes Entertainment. It is based on the story written by Hans Christian Andersen. It follows the original tale, but Thumbelina now has the mission of arriving at the garden of Tulips to prevent the dam from destroying and averting a flood caused by the snow when it melts. Her father sees that the land has holes and the water has high levels and he feels that the melting of the snow of winter will cause a big flood that puts Thumbelina's people and probably many animals in danger. Since Thumbelina's father is too old to go there, he sends her to warn the soldiers at the Meadow of Tulips. The setting is also changed from Denmark to the Netherlands.