Literature / The Hate U Give 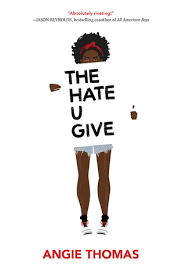 ...Little Infants Fucks Everybody.
The Hate U Give is a 2017 Young Adult novel by Angie Thomas.
Advertisement:

Starr hasn't seen her childhood crush in years. It's partly because her parents have sent her and her brother to a private school with mainly white kids, while eking out a living in Garden Heights. It's also because Khalil has been trying to take care of his ill grandmother. When Khalil drives Starr home after a disastrous party, a cop pulls them over and intimidates them. Starr is Forced to Watch when the cop guns down Khalil for asking if she's okay. The community is furious, especially when the media invokes Victim-Blaming and paints Khalil as a drug dealer. Starr has to decide if she can afford to stay quiet, while battling her trauma of witnessing Khalil die.

A Film of the Book was released in October 2018, starring Amandla Stenberg as Starr.

Two companion books exist: On The Come Up, which takes place in Garden Heights a few months after the events of The Hate U Give but does not feature any characters from it, and Concrete Rose, which is about Maverick Carter in his senior year of high school.