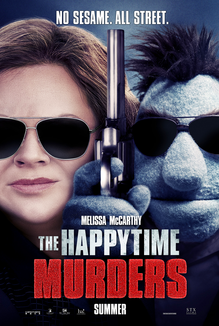 The Happytime Murders is an R-rated comedy-noir film from The Jim Henson Company, directed by Jim Henson's son Brian and distributed by STXfilms.

In a World… where puppets live alongside the humans as second-class citizens, among them is Phil Phillips (Bill Barretta): a disgraced cop turned private eye. When a new client who's being blackmailed leads him to investigate a porno store that gets hit as a robbery gone wrong... Phil's convinced it was a planned hit, because there was no money taken, and one of the victims was a cast member of The Happytime Gang, a famous '80s TV series that put puppets out into the mainstream. It gets personal as Phil's suspicions are confirmed — when the killer takes out another star of the show: Phil's brother. With Phil's ex-flame, Jenny (Elizabeth Banks), possibly next on the killer's vendetta list, it's up to Phil and his former partner, Detective Edwards (Melissa McCarthy), to put an end to the killer's rampage...

...but how is that possible when all the clues point to Phil being the culprit?