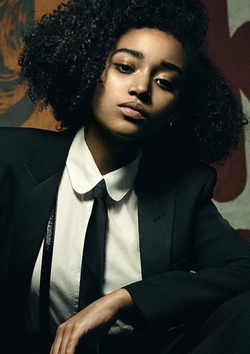 Amandla Stenberg (born October 23, 1998 in Los Angeles, California) is an American actor, comic book writer, and activist who rose to prominence in a small but impactful role as Rue in The Hunger Games. Since then, they've appeared in various films and television shows, like Sleepy Hollow and Rio 2, as well as the movie adaption of Everything, Everything.

In 2015, they co-wrote Niobe: She is Life, a comic book published by Stranger Comics.

They're also well-known for her political activism on social media, with their video "Don't Cash Crop My Cornrows" — regarding cultural appropriation— going viral on Tumblr and other similar sites.

They identify as non-binary, using both "they" and "she" pronouns. While they previously identified as bisexual

, they came out as gay

Their career provides tropes of: