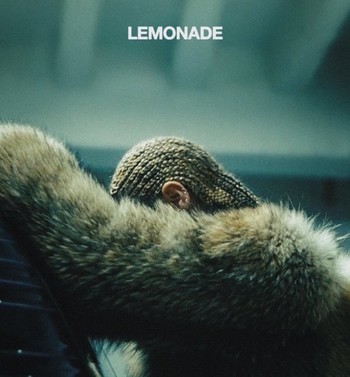 When life gives you lemons...
"Take one pint of water, add a half pound of sugar, the juice of eight lemons, the zest of half lemon. Pour the water into one, then to another several times. Strain through a clean napkin. Grandmother. The alchemist. You spun gold out of this hard life. Conjured beauty from the things left behind. Found healing where it did not live. Discovered the antidote in your own kitchen. Broke the curse with your own two hands. You passed these instructions down to your daughter, who then passed them down to her daughter..."
Advertisement:

Lemonade is a 2016 visual album project by Beyoncé, and her sixth overall solo album.

Inspired by turbulent times in her marriage to Jay-Z, Lemonade continues many of the themes discussed on its predecessor Beyoncé (2013); — marriage, motherhood, racial inequality, and so forth, featuring guest spots by Jack White, The Weeknd, James Blake, and Kendrick Lamar.

Led by the surprise release of "Formation" (and its subsequent performance at Super Bowl 50, which angered many people because of its political statement), Lemonade premiered on April 23, 2016 with a special 60-minute presentation airing on HBO, soon being made available for streaming and purchase afterward.

Hold up, they don't trope you like I trope you: