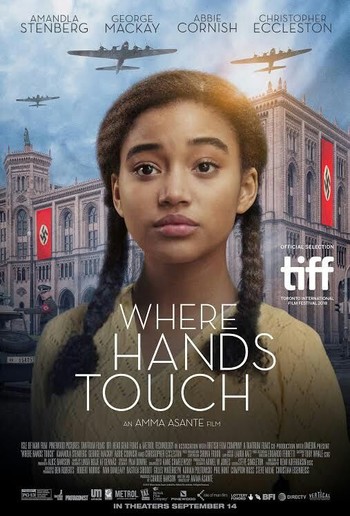 Where Hands Touch is a 2018 film about Leyna Schlegel, a biracial 16 year old girl living in Nazi Germany. As the child of a German mother and a black African father, she is despised by Nazi ideology, and in danger of forced sterilization to prevent her "contaminating" their gene pool. Leyna's mother Kerstin protects her by moving Leyna around, going from the Rhineland to Berlin with her little brother Koen. Her aunt and uncle aren't happy because the association endangers them. Lenya is kicked out of school due to her ancestry, and Kerstin gets false papers showing she's already been sterilized so the Gestapo will leave them alone. Seeking to belong, Leyna starts to embrace Nazi ideology, and begins a secret romance with a member of the Hitler Youth, Lutz, who sees past her race. Yet when Leyna becomes pregnant with their child, danger looms for them both... The film stars Amandla Stenberg, Abbie Cornish, George MacKay and Christopher Eccleston.