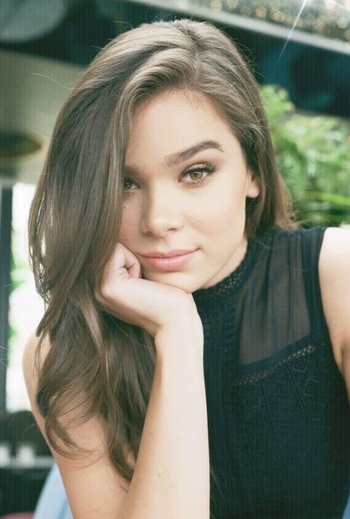 "Guys don't ask you out? Yeah they do. I just don't go."
Advertisement:

Hailee Steinfeld (born December 11, 1996 in Tarzana, California) is an American actor and singer. She is Ashkenazi Jewish on her dad's side, with an eighth each African-American and Boholano Filipino ancestry from her maternal grandfather. Her onscreen roles tend to gloss over this entirely, but it's a well-known fact to fans.

Her breakout role as Mattie Ross in The Coen Brothers's True Grit gave her an Academy Award nomination for Best Supporting Actress (despite being the main character), becoming the 9th youngest nominee ever in that category.

In 2015, after appearing in Pitch Perfect 2, she signed a deal with Republic Records to release a full album, including the single "Love Myself".