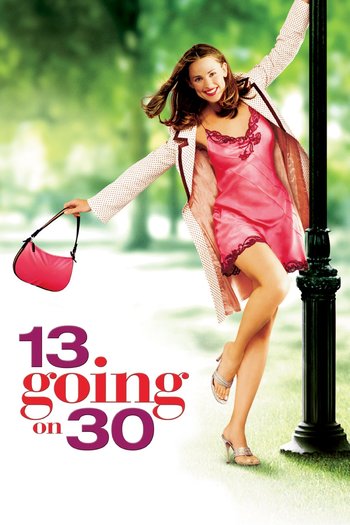 For some, 13 feels like it was just yesterday. For Jenna, it was.
Matt: You can't just turn back time.
Jenna: Why not?
Advertisement:

As a solution to this, she wishes to become older and successful and beautiful and popular and pretty much everything else. So, with a little help from a magic dust, she ages seventeen years in a blink and wakes up as powerful magazine editor, whose best friend is Lucy Wyman, aka Tom-Tom (Judy Greer) the old queen bee at her school.

The only problem is, she doesn't remember a thing of how she passed the past years. Matt (Mark Ruffalo), a nerd who was her only friend at high school, helps her to find herself; but what if she does not like how she turned out to be? And what if she sacrificed more than just her youth to get to where she is now?

For the trope that this movie used to name, see Overnight Age-Up.