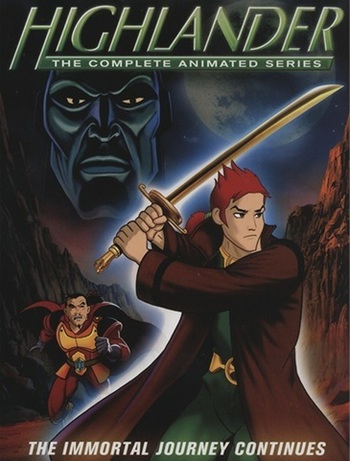 Seven centuries have passed since the world was plunged into darkness...
Advertisement:

A cartoon based on the Cult Classic film Highlander taking place in a post apocalyptic wasteland seven hundred years after a giant asteroid devastated Earth (with a little help from fallout caused by nuclear missiles deployed in a failed attempt to stop it). After "The Great Catastrophe", as it came to be called, the world's immortals banded together to restore the world to its former state. Unfortunately they were betrayed by the evil Immortal known as Lord Kortan, who decided he'd rather have the world stay a miserable ruin because it'd be easier to conquer and rule that way and because the other immortals, now known as Jettetorsnote from the French jette, "to throw", as in those who have thrown down their swords, took a mystical oath that prevented them from killing another immortal, which meant they were all powerless to stop him. Didn't really think that one through.

Kortan kills the protagonist of the first movie, Connor McLeod, and proceeds to hoard the last of Earth's science and technology for himself in his walled fortress city of Mogonda, which he rules with an iron fist. Now, only the newly awakened immortal Quentin McLeod, born after the others took the oath, can stop Kortan and restore Earth to her former glory. To do this he'll need to track down the other immortals and gain their knowledge and skills. Fortunately for them, a side effect of the oath allows them to perform The Quickening by holding their sword with Quentin instead of getting their heads cut off, though it does cause them to lose their immortality as their power is transferred to Quentin.

The series started in 1994 and lasted for two seasons. There were a total of 40 episodes. Notably, this series does not share continuity with any other version of Highlander. While most sequels and spinoffs, though usually unrelated to each other, at least nominally follow on from the continuity of the first film, in this series Connor dies before the show even starts without ever attaining "The Prize" while Ramirez, conversely, survives and becomes the mentor to the main character.