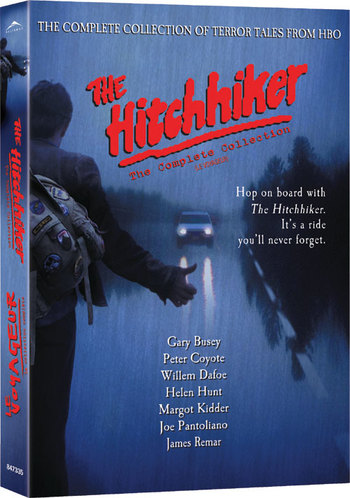 The series' only regular character is an unnamed wanderer called The Hitchhiker, briefly played in early seasons by Nicholas Campbell, but most memorably played by Page Fletcher. The Hitchhiker starts each episode by describing its main character and what he/she does, and reappears toward the end, explaining the moral of the character's story, and reiterating how he/she eventually screwed up.

Though the series cast a lot of little-known Canadian and American (and later, European) actors, it also showcased lots of established stars and up-and-comers before they became famous, including the likes of Kirstie Alley, Helen Hunt, Willem Dafoe, Brad Dourif, and many others.

The Hitchhiker was a prominent mainstay of the mid-late-1980s mystery/supernatural anthology boom, which also featured Ray Bradbury Theater, The New Alfred Hitchcock Presents, Tales from the Darkside, and The Twilight Zone.