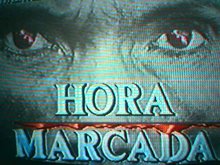 Hora marcada (Spanish for Marked Hour) was a well know Mexican horror Anthology series produced by Carmen Armendariz in the late '80s similar to Tales from the Darkside.

Using various settings such as haunted houses, vampires and all kinds of supernatural themes, this series of half-hour episodes showed several stories that were the stuff of nightmares to many people during those years. Many know Mexican directors such as Guillermo del Toro and Alfonso Cuarón contributed in the making of some of these episodes when they weren't as famous as they are now.

One constant theme in the series was the presence of a black-clad woman simply known as the Woman in Black, who, supposedly, was the incarnation of Death.