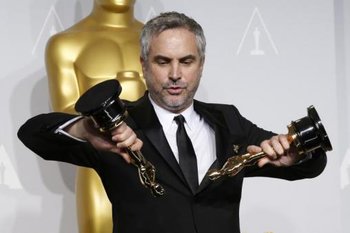 Mr. Cuaron explains Gravity using his Oscars.
Alfonso Cuarón Orozco (born November 28, 1961 in Mexico City, Mexico) is a Mexican director who frequently directs mainstream fare in an artsy style, sometimes with an eye towards political commentary and/or exploring teen angst. His most notable films include Y tu mamá también, Harry Potter and the Prisoner of Azkaban, Children of Men, Gravity and Roma.
Advertisement:

He was also the director for the infamous Autism Speaks advertisement I Am Autism. He likes to pretend it didn't happen.

He became the first Latin American director to win a Best Director Academy Award, for Gravity.

He is friends with fellow Mexican directors (and Oscar winners) Guillermo del Toro and Alejandro González Iñárritu, the three being collectively known as "The Three Amigos of Cinema."

He is also a co-creator of the series Believe on NBC.

Common tropes in his movies: