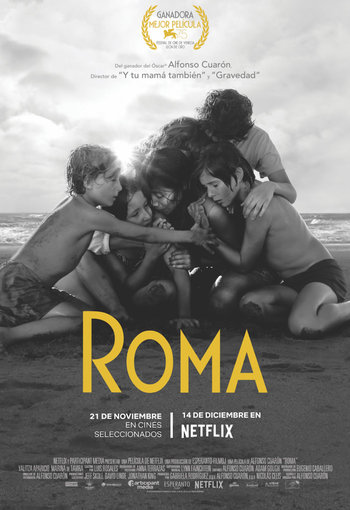 Roma is a 2018 drama film written and directed by Alfonso Cuarón.

It is set in Mexico City in 1970-71, and is is a semi-autobiographical take on Cuarón's upbringing. (In fact, the house in the movie is located directly across the street from the house where Cuaron grew up.) The protagonist is Cleodegaria Gutierrez, the live-in maid for an upper-middle class family. She works for Sofia and Antonio, parents of four children, and Antonio's mother Teresa. It eventually becomes clear that Antonio and Sofia's marriage is strained, and Antonio is seizing multiple opportunities to be away from home. Meanwhile, Cleo is dating Fermin, an aspiring martial artist.

is a major plot point.

It began being available to stream on Netflix on December 14, 2018, but it has been in limited theatres since November of that year.