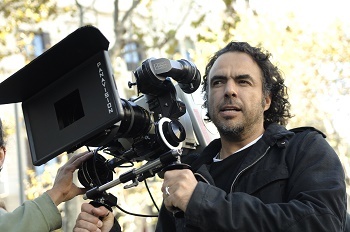 "Who gave this son of a bitch his green card?"
—Sean Penn (who starred in 21 Grams) announcing that Iñárritu had won the Academy Award for Best Picture
Advertisement:

Alejandro González Iñárritu (born August 15, 1963) is a Mexican director best known for his dark morality plays and his so-called "Death Trilogy" centering around themes of death. He is also well known for being friends with Alfonso Cuarón and Guillermo del Toro, the three of them making up the "Three Amigos", a dubbed group whose films, in contrast to the idealistic tone of Mexican cinema years before, have more cynical subjects and tones.

Tropes applying to his films: