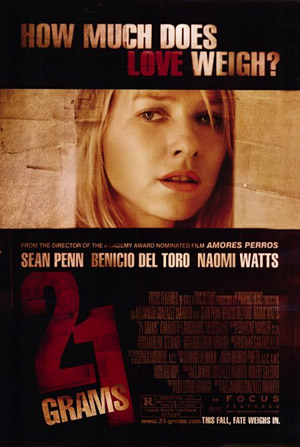 Like Arriaga's and González Iñárritu's previous film, Amores Perros (2000), 21 Grams interweaves several plot lines, around the consequences of a tragic automobile accident. Penn plays a critically ill academic mathematician, Watts plays a grief-stricken mother, and del Toro plays a born-again Christian ex-convict whose faith is sorely tested in the aftermath of the accident.

21 Grams is presented in a non-linear arrangement where the lives of the characters are depicted before and after the accident. The three main characters each have 'past', 'present', and 'future' story threads, which are shown as non-linear fragments that punctuate elements of the overall story, all imminently coming toward each other and coalescing as the story progresses.