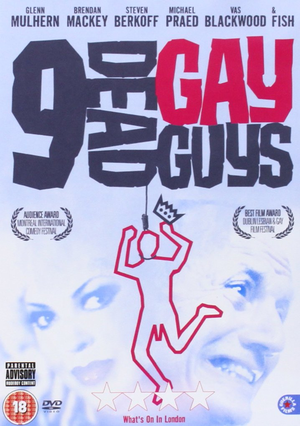 9 Dead Gay Guys is a 2003 British dark comedy about two young Irish lads, Byron and Kenny, who go to London to find their fortune. Unfortunately, they end up giving blowjobs to older gay men in order to subsidize their drinking habits. But when the Queen, lover of the very rich and very discreet Orthodox Jew Golder's Green, dies, there's a rush among the various unsavory elements of the London gay community, including Psycho Lesbian Iron Lady, the very small (in more ways than one) Desperate Dwarf, and our two heroes, to get into Golder's Green's bed, rumored to be absolutely full of money. But to get to Golder's Green, you need to pass the "Really Hard Red Bull Test," involving 2 cans of Red Bull and something as long as both of them stacked one on top of the other...