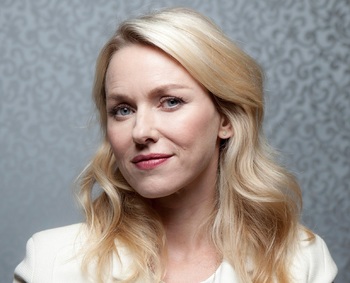 "I'm not this dark, twisted person. Yes, I have my demons and this is my way of exorcising them. It gets them out - and better out than in. Actually, I think that it's the comedians who are the darkest people on the planet, because they think life's just bloody hilarious."
Advertisement:

Naomi Ellen Watts (born 28 September 1968) is an award winning British-Australian actress and occasional producer. Born in Shoreham, Kent in the UK and raised in Australia before moving to America, Watts struggled in the movie scene for some time, taking on small roles in films she has since admitted were "shit" to pay the rent, before being cast by David Lynch in the lead role for his project Mulholland Dr.. Her performance as Betty Elms/Diane Selwyn won critical acclaim and the attention of some major players in Hollywood and beyond. She has since enjoyed success in a far greater choice of film roles, balancing her resume with box-office successes like Gore Verbinski's 2002 remake of the Japanese horror film Ringu and deeper roles in indie films such as 2003's 21 Grams, which earned her an Academy Award nomination for Best Actress that many felt was long overdue.

In addition, Watts had a relationship with late actor Heath Ledger (she allegedly had to talk him into starring in 2005's Best Picture nominee Brokeback Mountain) from August 2002 to May 2004 before breaking up with him in 2005 and later meeting actor Liev Schreiber in the spring of 2005. They have since had two children together. They later broke up in the fall of 2016. In 2017, she began dating her Gypsy co-star Billy Crudup.

Her father, Peter Watts, used to be Pink Floyd's road manager. Notably, both her parents contributed spoken word vocals to The Dark Side of the Moon.

Films in which she appeared with pages on this wiki: