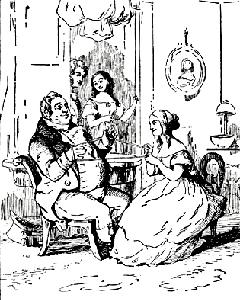 Mr. Joseph Entangled
William Makepeace Thackeray's Vanity Fair: A Novel Without a Hero (1847-48) is a multiplot novel tracing the varied fortunes of the charming (but vicious) Becky Sharp and her sometime friend, the beautiful (but blank) Amelia Sedley. During the Napoleonic era, the novel's many characters travel throughout Europe—fighting battles, scheming, and looking for cash. As the title suggests, the novel satirizes the social and sexual pretensions of a thoroughly dissolute High Society. The reader meets adulterers, gamblers, and con(wo)men of every description, only some of whom get their rightful comeuppance. Although readers, both in the Victorian Era and since, have sometimes found Thackeray's treatment of Amelia to be gushingly sentimental, Vanity Fair can be exceptionally hardheaded in its attacks on moral hypocrisy and romantic cliches. The subtitle may be ironic, but it's also serious: even the honest soldier William Dobbin, who is the closest thing the novel has to a moral center, doesn't end the novel unscathed.
Advertisement:

Notably, the novel was first published with Thackeray's own illustrations, some of them crucial to the plot.

Vanity Fair has been filmed and televised several times, beginning with a silent film released in 1911. The most famous of these adaptations is Becky Sharp (1935), the first ever feature film to use the three-strip Technicolor process. Mira Nair's 2004 film version, starring Reese Witherspoon, turned Becky into the real heroine.

Not to be confused with the Fashion Magazine with the same name.

"Ah, Vanitas Vanitatum! Which of us is happy in this world? Which of us has his desire, or, having it, is satisfied? Come, children, let us shut up the box and the puppets, for our play is played out."