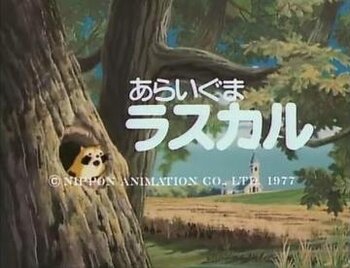 Rascal the Raccoon (あらいぐまラスカル, Araiguma Rasukaru, lit Raccoon Rascal) is an anime series from World Masterpiece Theater, based on the novel Rascal: A Memoir of a Better Era by Sterling North.

The anime series, which was produced by Nippon Animation as part of the World Masterpiece Theater series of anime and aired in 1977, is one of the better loved adaptation on the same level as A Dog of Flanders. While the anime was airing, there were heavy demands for raccoons for pets in Japan that many pet shops started unscrupulously importing raccoons from the US. This ultimately leads to the Japanese population releasing raccoons en-masse into the wild upon the final episode of the anime and the departing of the aesop of the series, environmental damage ensued. Rascal has been cited by many studies to be one of the causes of raccoons becoming an invasive species in the country.

And yet, the Japanese still hold no grudge for the series. Indeed, merchandise continued pouring forth in Japan, and Rascal became a cultural icon. Music for the series was "borrowed" and used in Frogger. There was a SNES game coming out almost 15 years after the anime ended, and in 2016 a VR hide-and-seek game was released for the PC. Nippon Animation had even adapted Rascal as it's own Mascot at one point, and even now Rascal is still heavily marketed, with Web Original shorts still being released from time to time and some of the weirdest crossovers in the world happening (someone please explain how Rascal fits in with