Anime / The Story of Perrine 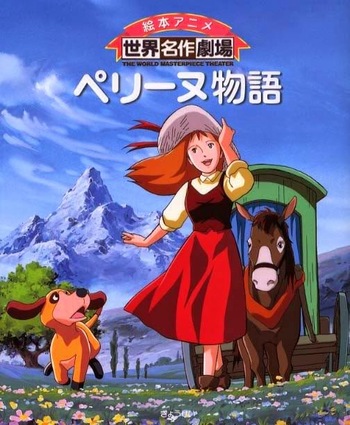 The Story of Perrine (ペリーヌ物語 Perīnu Monogatari, lit. "Story of Perrine") is a Japanese anime series by Nippon Animation. It is the ninth production in the World Masterpiece Theater series, based on the French novel En Famille (aka Nobody's Girl) by Hector Malot. The series aired from January 1, 1978 until December 31, 1978, spanning 53 episodes. It was dubbed and exhibited in many places like Philippines, Chile, Mexico, Venezuela, Iran, etc.

Like the original book, it follows the adventures of the French-Indian teenager Perrine Paindavoine as she reaches for the northern village of Maraucourt, where her grandfather lives, and makes a life for herself there. It quite expands on the story, however, to make it last longer: it begins before Perrine, her Ill Girl mother Marie, their donkey Palikare and Perrine's puppy Baron's arrival to Paris (how the book began, save for Baron's presence) and follows the two there, before it more or less retakes the original plot...

Aside of what the novel offers, these are the series' tropes: