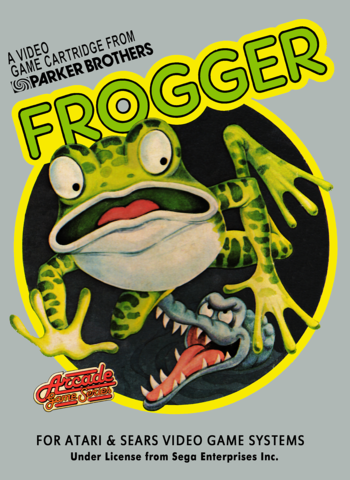 Frogger is an arcade game introduced in 1981. It was developed by Konami, and licensed for worldwide distribution by Sega/Gremlin. The game is regarded as a classic and was noted for its novel gameplay and theme. Frogger is still popular and versions can be found on many Internet game sites, as well as having spawned numerous sequels for a variety of systems.

The object of the game is to direct frogs to their homes one by one. To do this, each frog must avoid cars while crossing a busy road and navigate a river full of hazards. The skillful player may obtain many bonuses along the way.

The only player control is the joystick used to navigate the frog; each push in a direction causes the frog to hop once in that direction. On the bottom half of the screen, the player must successfully guide the frog between opposing lanes of trucks, cars and other vehicles, to avoid becoming roadkill.

The middle of the screen, after the road, has a median where the player must prepare to navigate the river.

By jumping on swiftly moving logs and the backs of turtles, the player can guide his or her frog safely to one of the empty lilypads. For some odd reason, the frog cannot swim. The player must avoid alligators, snakes, and otters in the river, but may catch bugs or escort a lady frog for bonuses. When all five frogs are directed home, the game progresses to the next, harder level.

Konami and Sega had a legal battle over who owned Frogger. Despite this, the original Frogger was the final licensed game ever produced and released for the Sega Genesis in 1998 (as well as the SNES in the same year, where it is the final cartridge ever released, but only the penultimate official SNES release in any format - the title of final release proper goes to Star Fox 2 in 2017 thanks to the SNES Classic) and Konami would bring installments of Contra and Castlevania to Sega consoles.

While the original game never got any in-arcade sequels, Frogger would receive many console and handheld installments that adapted the tile-hopping gameplay, and would use Frogger as the name for the player character. The most well-known of these are the Hasbro Interactive-published Frogger and Frogger 2: Swampy's Revenge, 3D games which feature Frogger and friends exploring levels to find five baby frogs. Konami would take over development and publishing for Frogger games on sixth-gen systems, starting with the poorly-received 3D platformer reboot Frogger: The Great Quest and then moving into the Frogger's Adventures series, which all used a similar design for Frogger and mostly similar play styles. This series would end after Frogger: Helmet Chaos, and since then most Frogger games have been strictly arcade throwbacks.

Frogger was also featured in a subplot of an episode of Seinfeld, aptly named "The Frogger".

The original game has examples of:

Other games in the series have examples of: