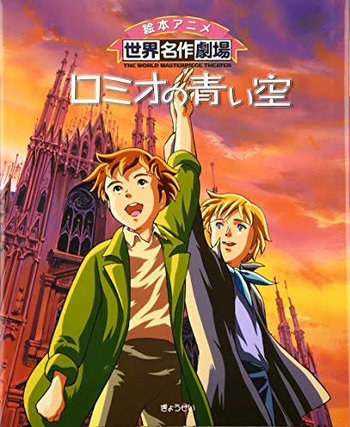 Romeo's Blue Skies (ロミオの青い空) is an anime series produced by Nippon Animation and released in 1995. It was based on the 1941 novel Die schwarzen Brudër ("The Black Brothers") written by Liza Tetzner.

It tells the story of a young boy named Romeo, who lives in the village of Sonogno, Switzerland with his family. On the day of the festival during summer, the field in the village was caught on fire and the crops that Romeo's family have tended were damaged badly. Things get worse when Romeo's father has collapsed and has risk becoming blind if he isn't cured immediately. Having no money to pay for the medical treatment, Romeo is forced to sold himself to the God of Death and he has to leave the village to work as a chimney sweeper. During his journey, he meets a mysterious boy named Alfredo and they become friends. They later met some of the boys who were also sold and attempted to escape. They're caught by God of Death and later forced to cross the lake to Milan by boat during the middle of the storm. Their boat was capsized but Romeo and Alfredo managed to survive. When they reach Milan, they become separated and then soon met with other chimney sweepers. Meanwhile, a gang called the "Wolf Pack" is harassing other kids in the streets and the chimney sweepers are no exception. Wanting to protect themselves from the Wolf Pack, Alfredo, Romeo and some of their fellow chimney sweepers formed a secret fraternity called the "Black Brothers" and thus their adventure as a group begins.

The show is the 21st entry of World Masterpiece Theater series. At the time it was released in Japan, the series was constantly receiving poor ratings and at risk being cancelled. Wanting to attract new audiences, Nippon Animation gives this show more emphasis on action and adventure while staying close to the series premise but it didn't do so well. It became popular thanks to internet exposure and Nippon Animation sometimes create merchandise and cameos based on it.