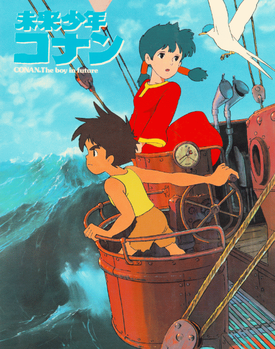 A.K.A. Mirai Shounen Konan and Conan, The Boy in Future.

An anime series airing on NHK during 1978, Future Boy Conan features direction, storyboards and character designs by Hayao Miyazaki. The story is based on The Incredible Tide by Alexander Key, also known for the Witch Mountain books.

In the far future time of July 2008, war breaks out between two great nations, using electromagnetic bombs even more powerful than nuclear weapons. This causes massive earthquakes, tidal waves, the Earth tilting off its axis, and the continents breaking apart and sinking. An attempt to escape to outer space fails, but one ship crashes on Remnant Island, which is still barely capable of sustaining life. Two of the survivors are able to have a child before they pass away.

The story proper opens with the child, Conan, now in early adolescence and living alone with his adoptive grandfather, the sole remaining survivor of the crash. They believe themselves to be the last humans on Earth. One day, a girl named Lana washes up on the shore. Conan is more befuzzled by the concept of "girl" than by her apparent ability to talk to birds. Lana is quickly followed by soldiers of Industria, one of the few remaining outposts of the old civilization.

Meanwhile, the Industrian soldier Monsley docks with the salvage ship Barracuda, and she clashes with the ship's captain Dyce before taking off to deliver her prisoner.

Conan arrives on a somewhat more populated island, and runs into another orphaned survivor, Jimsy. They soon become fast friends, and when the Barracuda docks at the island, they sneak aboard to head to Industria to rescue Lana.

Which does happen, but not before many more exciting adventures have happened.