Anime / The Castle of Cagliostro 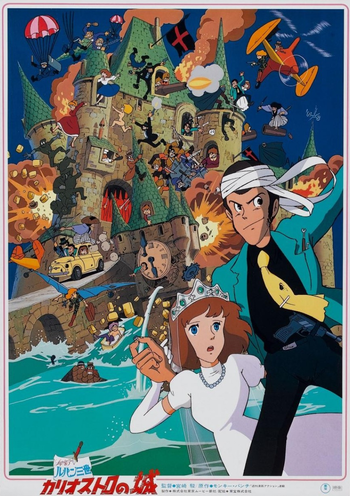 Believe in the thief.
Advertisement:

Lupin and Jigen successfully rob the Casino de Monte-Carlo. Fleeing in their car, they're up to their necks in cash… which Lupin soon realizes is counterfeit. These legendary "Gothic Bills" – counterfeit bills that can pass for real to all but the most trained eye – inspire the duo to visit the tiny European Grand Duchy of Cagliostro, often rumored to be the bills' source, for their next heist.

Once Lupin and Jigen cross the border, they end up rescuing a girl in a wedding dress from a group of armed mooks trying to capture her. The girl is Clarisse, the daughter of Cagliostro's late ruling Grand Duke and the betrothed fiancée of the regent and Count of Cagliostro (whose side of the Cagliostro family line oversees and perpetuates the nation's dirty business). A legend says a reunification of the two families will unlock the secret of Cagliostro's lost treasure, which the Count desperately wants. Jigen figures something else is up when he notices Lupin's familiarity with Cagliostro's landmarks, Clarisse, and her mysterious ring.

Certain things are, of course, inevitable: Lupin tries to steal the girl, the treasure, the source of the Gothic Bills, and whatever else he thinks he can get away with; Fujiko is in the castle trying to steal at least one of Lupin's targets; the Count is a formidable villain; and Inspector Zenigata is still trying to hunt Lupin down (though he gets more than he bargained for).

Castle of Cagliostro is famous for being Miyazaki's first film (as well as one of his only two non-Ghibli films, the other being Nausicaä of the Valley of the Wind, both of which predated the studio's founding), but a couple of its scenes achieved their own fame. The car chase at the beginning of the film was allegedly praised by Steven Spielberg as one of the greatest car chases ever set to film, and he's alleged to have called Cagliostro one of the greatest adventure movies of all time.note  According to various sources (apparently none of whom had anything to do with Manga video's DVD packaging

◊), Spielberg never actually saw the film. The other famous scene is the climactic battle-and-chase in Cagliostro's clock tower; at least two groups of American animators have paid direct homage to it.

In the West, this film has passed through more than a few hands. Game developer Stern used footage of Cagliostro and The Mystery of Mamo to make a laserdisc game Cliff Hanger. Then Asmik got to make another game based entirely on the film for the PlayStation. Cagliostro was then licensed in the early '90s by Streamline Pictures; their DVD release of the film was one of the very first anime released in the format (and one of Streamline's last releases ever). Manga Entertainment picked up the license in 2000 and gave the film a new dub by the Animaze studio (better known for their dubs of Cowboy Bebop and the Ghost in the Shell franchise), then re-released it in 2006 with a boatload of extra content (but an altered opening at TMS's insistence). Discotek Media acquired the license to Cagliostro in 2014 and released both a DVD and Blu-ray (the latter for the first time in the US) in 2015; their release includes both the Streamline and Animaze dubs, re-translated subtitles for the film, and a re-creation of the original subtitles used in TMS's 1980 theatrical release of the film in the United States. A "family-friendly" version of the Manga dub was also created specifically for this release. A few months later, Disney released the Streamline dub as part of their Miyazaki box set, with Discotek's permission.

Complete spoilers lie below, so don't read further if you don't want to know how this caper turns out!

The Castle of Cagliostro contains the following tropes: