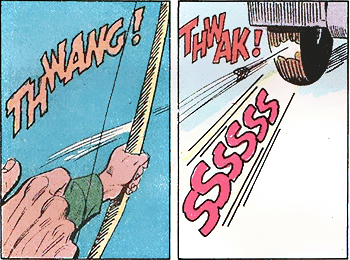 The classic action movie Anti-Vehicle tactic of shooting tires, or deflating them in any numbers of other ways, to hinder the maneuverability of a vehicle. The outcome of the tire damage depends to some extent on the special effects budget: the car might crawl to a stop, or become impossible to steer, or spectacularly crash.
Advertisement:

The tactic is Truth in Television: police have "spike strips" available for when a high-speed chase isn't the best option. This is a subtrope of Vehicular Sabotage. Spiked Wheels commonly have this effect. Compare to Anti-Cavalry, which takes out a different form of ground transport. Caltrops are a good way to achieve this effect.