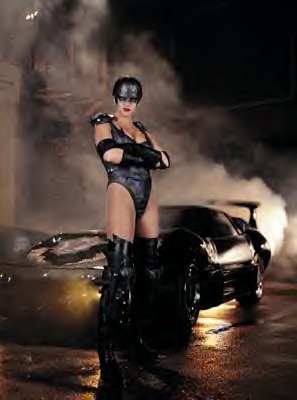 Black Scorpion is a made-for-TV movie that first aired on Showtime in 1995. It was followed by a sequel, Black Scorpion: Aftershock (1997), and a live-action series on the Sci-Fi channel. The latter lasted a single season, running from January to June, 2001. It was very campy, almost like a live-action Silver Age comic book, using deliberately exaggerated and unrealistic characters and events to comic effect. The television series in particular was heavily influenced by the 1960s Batman (1966) series as well as the trend of having Playboy models in leather getups akin to Baywatch. The bad acting, fanservice models and cheap production values made the series look like a porn parody film but without the sex. The character was revived for a short-lived 2009 comic book from Blue Water Productions.

After her father is murdered before her eyes, police detective Darcy Walker becomes the vigilante Black Scorpion to avenge him. She is assisted in this goal by a former car thief, Argyle Sims, who turns her car into the Scorpion Mobile and acts as her confident. Other important characters include Darcy's partner, Steve Rafferty, who is determined to capture Black Scorpion (and is more than a little smitten with the crimefighter), the corrupt Mayor Worth, her comically inept fellow officers Specs and Slugger, and their idiot boss Captain Strickland.

The series is available for streaming on Shout Factory

Tropes from the films and series include: