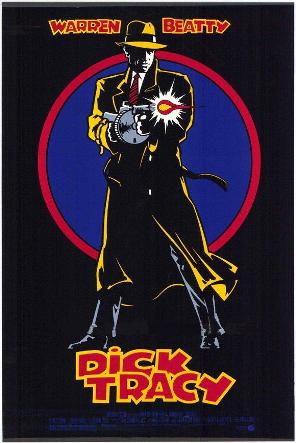 In 1990, Touchstone Pictures took Chester Gould's relatively simple crime-drama comic strip and reimagined it as a big-budget extravaganza with big-name actors, colorful costumes, special effects and plenty of music. Warren Beatty both directed the film and starred in the title role.

The setting is a large, unnamed city (inspired by Chicago) in late 1938. Detective Dick Tracy (Beatty) is the most dogged plainclothes cop on the street, dividing his time between punching out mooks and trying to keep his long-suffering fiancee Tess happy. A new challenge to his authority soon emerges in the form of up-and-coming gang boss Big Boy Caprice (Al Pacino), who unites all his former rivals into a citywide gangland coalition. Now Tracy's only hope in foiling Big Boy's schemes lies with nightclub singer Breathless Mahoney (Madonna), who is prepared to help the detective... as long as he gives her what she wants.

The movie also starred Glenne Headly as Tess Trueheart and Charlie Korsmo as the nameless "Kid." It won Academy Awards for Best Art Direction, Best Makeup, and Best Original Song (Stephen Sondheim's "Sooner or Later"). Pacino was also nominated for Best Supporting Actor (in a Playboy interview, he actually listed it among his top 5 performances).

One of the striking features of the film was its attempt to replicate, in live action, the flat colors and limited palette of the comic strip. Every yellow thing was the same bright yellow as Dick Tracy's trademark outfit, every blue thing was the same blue, every red thing the same red, and so forth. Years later, Sin City did this through the use of digital tinting, but in 1990 it was done "the old-fashioned way," using specific paint and lighting techniques to create the look.

For some reason, many people seem to be under the impression that the movie bombed at the box office, when in fact it made double its budget back in America, and triple when you factor in the rest of the world.

In fact, it was actually the highest grossing film of Warren Beatty's career. However, a combination of performing under Disney's expectations (Disney had hoped that Dick Tracy would be a hit on the same level as the previous year's Batman (1989), and initiated an immense marketing campaign accordingly, which ended up costing more than the movie itself cost to produce and enormously inflated its budget in real terms) and a decades-long battle over the rights between Beatty and the Tribune Co. put the kibosh on any immediate follow-ups.