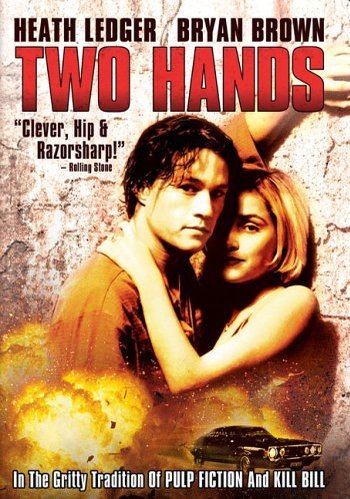 Two Hands (1999) is an Australian crime film starring Heath Ledger, Bryan Brown and Rose Byrne and directed by Gregor Jordan. It was praised by critics for its humour and the performances of Brown and the then relatively unknown Ledger and Byrne. It cemented Ledger's status as a star in his own country after his introduction to American audiences in 10 Things I Hate About You.

Jimmy is a young man working as a bouncer in the red light district of King's Cross, Sydney. When gangster Pando gives him a chance to earn some extra money, Jimmy takes him up on the offer. Pando instructs Jimmy to deliver $10,000 to a woman in Bondi, but Jimmy arrives to find the woman dead and then loses the money before he's able to return it. Rightfully fearing Pando's wrath, Jimmy hatches a plan to rob a bank in order to pay him back.