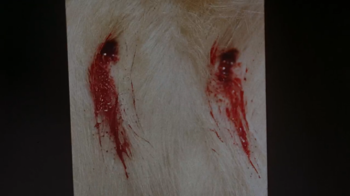 "Six, all in all - approximately one a week over the past six weeks."
Written by Vince Gilligan
Directed by Cliff Bole
Mulder: You're scaring me. I wanna know exactly what you're gonna tell Skinner.
Scully: Oh, you want our stories straight.
Mulder: No, no, no, I didn't say that. I just want to hear it the way you saw it.
Scully: [Primly] I don't feel comfortable with that.
Mulder: Prison, Scully. Your cellmate's name is gonna be Large Marge. She's gonna read a lot of Gertrude Stein.
Advertisement:

After Mulder pursues a boy he is convinced is a vampire into the woods and rams a stake through his heart, only for Scully to discover he has a set of false fangs, Mulder and Scully find themselves in deep trouble. Faced with the unsettling prospect of a massive lawsuit against the FBI, an unpleasant meeting with Director Skinner and possible criminal charges, Mulder suggests that he and Scully compare their stories about what happened in the build-up to Mulder's actions. Mulder and Scully each present their perspectives of events and those involved in them, including the local sheriff (Luke Wilson) who may or may not have buckteeth, Mulder being drugged and attacked which may or may not have led to him singing the theme to Shaft, and a boy who may or may not be an actual vampire....

Mulder: That is... essentially, exactly the way it happened.
Scully: Essentially.
[...]
Mulder: Except for the part about the buck teeth.
Feedback

After Mulder realises that he's killed a fake vampire, his foul mouth is interrupted by the iconic intro.

After Mulder realises that he's killed a fake vampire, his foul mouth is interrupted by the iconic intro.