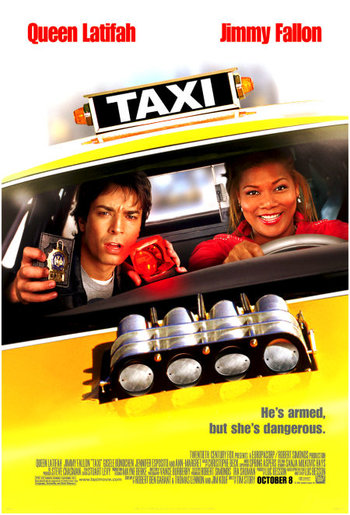 Taxi note goes under that title in the USA while New York Taxi (or something similar) is used in the many countries where the French originals were released is a 2004 American action-comedy directed by Tim Story. It is a Foreign Remake of the 1998 French film Taxi, starring Queen Latifah, Jimmy Fallon and Brazilian supermodel Gisele Bündchen. Luc Besson (writer and producer of the French film) is still credited as a co-writer, but he's actually also co-producer here.

Belle Williams (Latifah) is a bicycle courier-turned-taxi driver. Her souped-up Ford Crown Victoria is confiscated after she ended up in the wrong place at the wrong time, namely near a bank robbery. Andy Washburn (Fallon) is a Clueless Detective who doesn't know anything about cars and loses his driver's license early in the movie. The two of them team up to stop the gang behind the bank robbery.