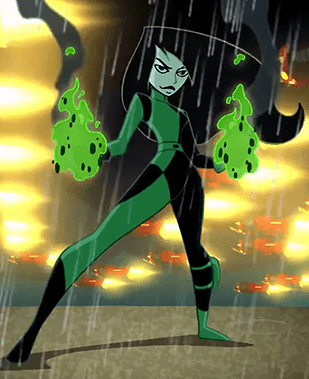 Aw darn, I Broke a Nail... gouging your eyes out!
"I'm pretty much the Queen Bitch of the Universe."
— Sarah Kerrigan, the Queen of Blades, Starcraft: Brood War
Advertisement:

Those stupid boys and their ridiculous little games. What's a girl to do? Well, if you're this girl, most likely beat them up.

She may like to dress in black and keep her nails particularly long and sharp, unless the story cares about practicality. A popular combination with The Baroness, but usually not The Vamp or the Femme Fatale, since she prefers to pummel The Hero to a bloody pulp instead of seducing him, but there are certainly exceptions. Can this wild woman be tamed? Go on, keep thinking that way. We'll see how long you live.

If she is brought over to the side of good, even if only for an episode, expect her to be reluctant about it at best. Typically, the DAG still falls prey to that old saw about women being wiser than men,note "wise" in this case can mean "cunning" or "devious" and is more likely to lock horns with males in her camp. She typically acts as the Evil Counterpart to an Action Girl, and the two will often get into a Designated Girl Fight.

For some reason, you will almost never find a Faux Dark Action Girl. This is probably because the standards the decade or culture sets for women usually don't apply to villains, and also because, regardless of gender, a villain who needs to be rescued by other villains would be utterly pointless from a narrative perspective, and being evil she doesn't earn her sympathy points for being captured. However, this doesn't mean that Faux Dark Action Girls do not exist.

Do not confuse with Dark Magical Girl, who is more likely to be an Anti-Villain and thus more sympathetic. They are also supposed to be foils to a heroic Magical Girl and possibly her friend after being defeated; neither of which is the case with this trope. A Dark Magical Girl really just wants to be loved, while the typical Dark Action Girl would much rather be feared.

Compare Dark Chick, which can overlap.