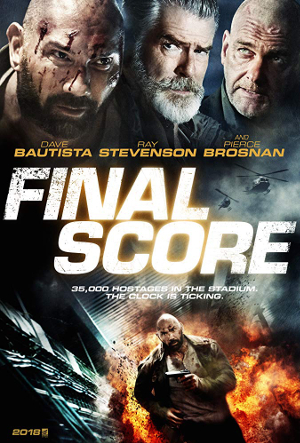 It's all about to kick off

, who previously directed The Tournament and Heist (2015). The screenplay was written by David and Keith Lynch

, and the premise can essentially be summed up as Die Hard in a football stadium (soccer stadium to Americans).

Dave Bautista stars as Michael Knox, a former soldier forced back into action when armed criminals led by Arkady (Ray Stevenson) seize control of a stadium during a European cup semi-final match involving West Ham United of the English Premier League. The bad guys demand the authorities hand over Arkady's brother Dimitri (Pierce Brosnan) before the match ends, otherwise they will detonate bombs with the 35,000 strong crowd still inside.

For authenticity, the movie was shot on location at Upton Park in London (also known as The Boleyn Ground), formerly home to West Ham before the team relocated to the London Stadium.

. A trailer can be viewed on the movie's IMDB page

No connection to the BBC football results and analysis programme with the same title.