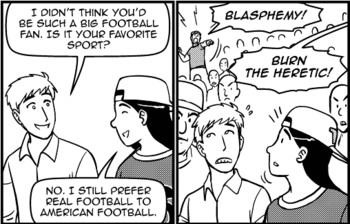 Religious tolerance has its limits, even in America.
"We're American men, we like all sports except for soccer
'Cause soccer's just a bunch of foreigners runnin' around"
— Josh and Nathaniel, Crazy Ex-Girlfriend: "Sports Analogies"

The Beautiful Game of Association Football is the world's sport. Nearly every country on Earth loves it. Focus on "nearly".

For a long time, one major exception to this was the United States of America, which only loved the traditional American team sports of baseball, basketball, ice hockey, and their own game, which they call football (a.k.a. gridiron). However, since the 1970s, numerous attempts have been made to make the sport more popular in the States, and it has slowly made some major inroads: America has a fairly successful domestic league; the FIFA video game series is incredibly popular; their women's national soccer team has won four FIFA Women's World Cups (including the two most recent in 2015 and 2019); the men's team has vastly improved from joke team to regularly competing with soccer-crazy Mexico for the position of top dog in the North America confederation (CONCACAF) with several of its members playing for Europe's top clubs; and many children (more girls than boys) grow up playing it. It probably helps that many chunks of the US have big Hispanic populations, who love the sport. However, in spite of all of that, soccer still lags well behind other sports in America in terms of popularity, and it has nowhere near the religious fervor it has in other countries.

The attempts to grow the sport in America have also met widespread resistance in some circles. Many Americans just plain don't like the sport — considering it boring. And this is reflected in the media, where American characters will often go out of their way to bash the sport for all of the above (as well as the players' propensity for faking injuries). Another problem with soccer in American eyes are the low scores. Baseball and hockey are "low scoring" if they end 3-1. In American Football, a game that does not go into double digits is considered low scoring, and in basketball, triple-digit games are a common occurrence. In soccer, the tendency over the last decades has been towards lower scores. The last thing that irks Americans about soccer (and is frequently mentioned in anti-soccer rants) is its propensity for ties. While US sports fans tolerate the occasional tie in hockeynote Not anymore, the NHL and all other professional leagues use a shootout if the two teams are still tied after overtime (in the regular season, playoff games continue to play additional 20 minute periods until someone scores if the score is tied at the end of regulation). The last tie game in the NHL was on April 4, 2004. International and Olympic hockey also use the shootout and football, they greatly prefer games where there's a clear winner, and baseball and basketball will go into overtime until there is a clear winner, however long that takes.

Another possibility is that the soccer fandom is just too splintered within the United States. The first group are people who play the sport in childhood, but are discouraged from continuing with it because there are more lucrative sports scholarships in other sports. Athletes who have played on the women's US soccer team have mentioned this fact. The second group are immigrants who brought their love for soccer with them. They stay loyal to the soccer teams in their homelands, they'll even play the game at local parks during the weekends, but they will not attend American games. The next group after that are Europhiles who want to appear more worldly to their peers and to people outside the United States. They'll pick a European team and follow it religiously while looking dimly upon American teams due to Cultural Cringe. They'll know all the statistics for their chosen team and will read the Daily Mail just to keep abreast of rankings and game results. However, they won't actually sit down and watch a game unless it's the World Cup or they are watching it with their European friends. Next, there's the group consisting of fans who only follow and watch games in the "Big Five" European leagues because they want to see the best players in the world compete and hold the view that the MLS primarily consists of has-beens from those leagues staving off retirement or less skilled players who wouldn't cut it abroad. The final group is domestic soccer fans. They will follow their local professional team and will attend USSF games when given the chance. These splintered groups of American soccer fans rarely interact with each other except during the World Cup.

Finally, there's also the issue of soccer being seen as effeminate by many Americans. Compared to sports like hockey, baseball or football, where the athletes often hit the balls or pucks (and occasionally each other) with large blunt instruments and/or regularly ram into each other, that sort of contact violence is comparatively lacking in soccer. There's also the stereotype of soccer players "diving" to exaggerate their injuries, which makes them look bad when the Only a Flesh Wound mentality found in Football or Hockey is more admired. The fact that America's women's teams are so much more successful in international competition than their male counterparts and the sport's previously-mentioned popularity among teenage girls don't help either. Hence soccer in the United States falls victim to the Girl-Show Ghetto. At best, soccer is seen as acceptable for young boys, but not for older male teens or men.

Again, soccer being seen as effeminate in the United States isn't helped by the fact that the Americans are typically among the best at women's association football.

Contrast Rugby Is Slaughter, where it's American football that's seen as the inferior option.