Film / Fighting with My Family 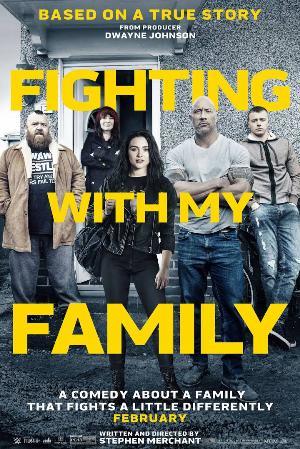 Fighting with My Family is a dramedy bio film, directed by Stephen Merchant and produced by Dwayne Johnson. It tackles the subject of Professional Wrestling.

Based off the 2012 documentary of the same name, the film follows the Bevis family. Well they prefer to be known as the Knights. They are a wrestling family - of parents Patrick and Julia (ring names Ricky and Saraya respectively), brother Zak and daughter Saraya. The latter is best known as Paige. Both Saraya and Zak try out for WWE. Guess which one makes it.

The film stars Florence Pugh in the lead role, Jack Lowden as Zak, Nick Frost and Lena Headey as their parents, Vince Vaughn as developmental trainer Hutch Morgan, Dwayne Johnson as himself, and actual pro wrestler and actress Thea Trinidad as AJ Lee.