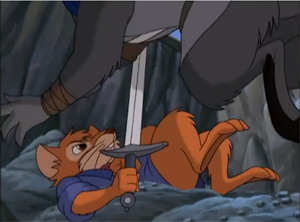 This is a situation involving an enemy charging at the hero, who then defensively puts a nasty, pointy surprise in front of them. Result: The enemy runs onto the pointy end, and there may be a moment where the hero and their enemy stare at each other before they reveal that the foe has just killed themselves. By waiting until the last moment to reveal the victor of the battle - when the hero and the enemy are close enough to touch - the situation comes to an exciting and dramatic conclusion.

This trope does not apply to every impalement. It only applies if the enemy is impaled by their own momentum without the defender needing to move from their position.

Sub-trope of Impaled with Extreme Prejudice, Inertia Is a Cruel Mistress, and when the one impaled is a villain, Self-Disposing Villain. Also a subtrope of Deadly Dodging, for when the dodging results in the enemy impaling himself on something. Sometimes, when other movement methods are involved, you can have Telefrag instead. Compare Spikes of Doom and The Spiny. See also Bullfight Boss.