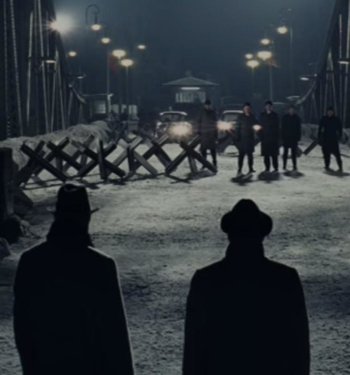 "You send over our guys, and we'll send over the two Big Macs and large Coke!"
Advertisement:

One of the heroes has been captured by the bad guys. His friends know where he's being kept, but the dungeon lies deep within the villain's impenetrable fortress, surrounded by guards, and a good old-fashioned prison break simply won't do.

However, it just so happens that one of the opposition has been spotted wandering around outside Camp Good Guy, and was conveniently dumb enough to get caught. Now there are two captives, one in each camp.

So what do the two opposing sides do in this situation? Each has something the other wants, and neither is willing to let up unless they can find a way to use the situation to their advantage. So they agree to trade hostages. They meet up at a certain location where the exchange will take place, both prisoners get to go free, and everyone's happy. Right?

Usually the captured member of the other team is no ordinary Mook. He may be someone who is important to the villain in some way, someone he cares about or needs in order to fulfill his Evil Plan, otherwise the other side would not bother with trying to get him back. Heroes usually don't need this kind of motivation to rescue a captive comrade, as they generally need less of a reason to save people. A Messianic Archetype may risk both his life and the chance of giving up whatever advantage he may have had, coupled with letting a villain go free, in order to save a total stranger, although it's just as likely that the captive will be someone close to the hero in order to facilitate drama.

The exchange often involve both parties facing each other across a wide open area, with armed soldiers present or hidden in case the other party tries something. Each captive walks toward the other, they pass by each other in the center and proceed on to their own group. Often takes place on a bridge, since it marks the only crossing point of a natural barrier, such as a river or chasm, where two territories would typically be divided. It also gives both sides a clear view of each other as well as of the hostages in case anyone tries anything funny (providing there is no Ominous Fog), and can be symbolic for the hostages making their journey home.

Note that the downside of this agreement is, because Evil Is Petty, villains rarely make fair trades. While a hero will be bound to keep his word and make sure that the hostage is returned to the villain unharmed, the villain will often take the first opportunity to kill his hostage as soon as he gets what he wants, or to cause the heroes to walk into a trap, or find some other way to go back on his promise.

Cunning good guys or Anti Heroes may realize this and never intend to make a trade with the villain in the first place, or both sides may have the intention of screwing each other over, in which case the hostages themselves rarely have any say in the matter and may end up on the worse end of the deal.

If the hero decides to trade him/herself for the hostage, it's Take Me Instead. See also Hostage Situation and Checkpoint Charlie.