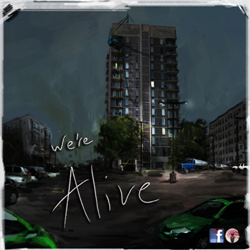 A story of survival
"Nothing scared me back then. I didn't fear death or what might be on the other side if today was my day. That was then, and this is now."
— Michael
Advertisement:

When a tiny riot in Los Angeles turns out to be not so tiny after all, US Army reserve Lieutenant Angel Tunudo is told to call his subordinates to arms, but only two of them - Sergeant Michael Cross and Specialist Saul Tink - show up to greet him at the reserve base. After working out that the riot is actually the start of a Zombie Apocalypse, the three men decide they have to take matters into their own hands. They rescue a handful of other people and set up camp in the apartment building where Angel's girlfriend used to live, but even with things going well at first it isn't long before the situation takes a realistic turn for the worse.

And that's not even the half of it.

. Each chapter is released for download over the Internet in 3 parts every 4 weeks. (The only exceptions so far have been the Season Finales. "The War" was 4 parts long, while "The Harder They Fall," "Scorched Earth" and "The Ink Runs Dry," were released as single, hour-long episodes.) Aside from the official site, there is a forum

In 2022, the creators announced a fifth season. Subtitled Descendants, it takes place 18 years after the start of the outbreak.