Zooooommxbies is a German Play By Post Game about a group of people trying to survive a Zombie Apocalypse in Sydney. The players create characters with different stats for overcoming the challenges the game master provides. The story is divided in different chapters, each featuring unique challenges which require a certain amount of characters to participate. A character's stats and the game master's dice decide if he/she is successful and can continue the game or fails and has to face the consequences — which are usually deadly for the character. Fortunately, there are also characters with certain special abilities that can be used to influence the outcome. 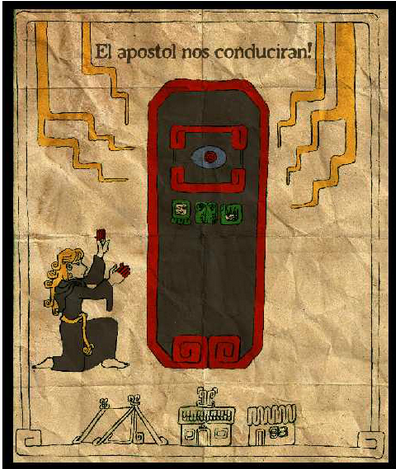 The apostle will guide us. Indeed she will.
20 years after the zombie apocalypse only few people remain alive. Those who survived live in small towns, scavanging the ruins of the old world to survive. Shengs Hope, Texas is one of these towns.

One night, a mysterious coffin appears on the shore - in it are the remains of patient 0. A group of heroes starts one of the most important journeys in the history of mankind to bring patient 0 - dubbed ADAM - to an old lab in San Antonio to synthesize the cure against the virus.

The roleplay started in early September 2015, and it took the players 3 months until they succeeded in their task. It is one of the roleplays with the highest wordcount in Germany, clocking in at around 750,000 words, written mainly by around 10 players and their game master, Daen vom Clan. It not only spawned most of the tropes listed here, it was also surrounded by a huge amount of hype, resulting in a lot of fanart made by some of the players and fans.

20 years have passed since the Zombie Apocalypse. Humanity rebuilt themselves in little towns all over the world. Shengs Hope is one of those little towns. Life there is not always good, but it's stable. Save. What could possibly happen?

After the arrival of ADAM on the shore the bravest people of Shengs Hope gather materials, food and ammunition to start their journey across Texas. Now is the time of the last goodbyes, sorrowful speeches and the rekindling of hope. Also, we really have to find a way to survive on the road.

Before our team can go north, we have to get batteries for ADAMs life support. In the area south of Shengs Hope live two possible trading partners: The clan Vulture and Sabals Keep - both factions are at war and the heroes have to decide who earns their trust.

After days of travel the road towards San Antonio is blocked. But on the horizon we see Shengs Hope burning. Something happened in the little town - and our heroes have to investigate and find out where our friends and families have been taken.

The heroes follow the trails of the kidnapped townsfolk, but are blocked by an army of zombies guarding the only bridge on the way there. Not only do they have to find a way through the enemies, but they also have to deal with the local brothel and his eccentric owner, the clan Flame-Rider and a lost zoo with all kinds of danger living there.

After months of travel the laboratory is finally on the horizon. But first, there is a whole new battle to be fought. If we go directly to the lab our friends and families, kidnapped by the cult, will die. Or we save those people, but at the price of maybe being to late to save the world. A hard decision, that threatens to tear apart the group...

San Antonio lies in ruins and the headquarter of the cultists, the lost Alamodome, brims with life. Our families are being hold there and we have to find a way in to save them. There are also other people and tribes still living in the ruins - but are they friends or foes?

Chapter 7 - History In The Making

The final battle for the world has begun. While most characters protect the laboratory, there are a few special missions - deadly, dangerous and most possibly extremely important...