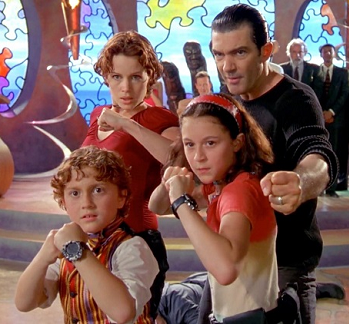 The family that kicks ass together, stays together.
"Holy crap that family is awesome."
— Max, The Fancy Adventures of Jack Cannon

Awesomeness seems to be either inherited, instilled at an early age, or both. There is at least one Wall of Weapons somewhere in the household. Nearly every member of the family could kick ungodly amounts of ass. They may be Super Heroes or Badass Normals in a Super Family Team. Even the cute little 5-year-old child could do things that would net most professional soldiers a Medal Of Honor or similar medal—and they do this kind of stuff daily. But the real magic of this family? Their indestructibility as a team. As strong as any member may be individually, when fighting together, their strengths balance their weaknesses and they support each other to the bitter end—and meanwhile will remind each other to pick up the groceries.

Needless to say, take on this family, or threaten one of its members, at your own peril—and don't be surprised when you lose badly to them.

On account of their (usually) unspoken reliance on The Power of Love, the Badass Family tends to be good guys, though maybe more Chaotic than Lawful. The matriarch is likely to be an Action Mom. Even if she's not, she'll surely be a Mama Bear. Likewise for the Action Dad. Expect the grandparents to be retired badasses who, if necessary, can show that they Still Got It.

Any kids they might have will be in distinct age groups—only one baby, or one "kid", or one teenager, unless there's a twin, in which case watch out. Harming the children of a Badass Family is generally a very bad idea.

Compare: The Family That Slays Together.